The Kentucky Derby contender Ocho Ocho Ocho, out of his depth at the derby, faces 11 at the third running of the Grade 3, $500,000 Penn Mile this Saturday at Hollywood Casino at Penn National Race Course. The son of Street Sense won the $1 million Delta Jackpot at 2 years old and finished third in the Grade 1 Blue Grass Stakes to Carpe Diem.

American Pharoah is scheduled to arrive at Belmont Park on Tuesday, June 2, a day earlier than originally planned. And, on June 6, American Pharoah will attempt to become the 12th Triple Crown winner and first to sweep the Derby, Preakness and Belmont since Affirmed in 1978!

War Story will bypass the June 6 Belmont Stakes in favor of the June 20 Ohio Derby at Thistledown. Conquest Curlinate; the Ontario-bred contender, is out and now will be running for Canada’s Queen’s Plate. 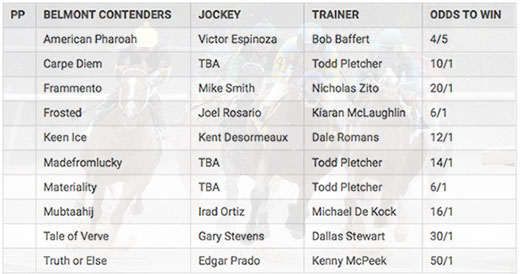